Today's artist spotlight is more of a spotlight on the works of various original zinesters, the Forgotten Zine Archive.

The Forgotten Zine Archive was started 11 years ago (eleven)!! I love its history.  It was created by Irish zinester, Ciarán Walsh, when himself and 3 friends recognised that the needs of certain members of maginalised groups were not being catered to, and out of a desire to support the independent publishing scene in Dublin, they formed their own archive, and ran it out of a warehouse space using their own personal collections. Made up of around 1200 zines, it was initially opened for a few hours every Sunday, but when the warehouse closed in 2005, the archive moved to Seomra Spraoi, and has moved with Seomra to various locations around the city. The zine archive’s primary role has been as a curated memory institution within which Irish zines could be both preserved, and made available to the public. It has survived by picking up donations and existing in various states of care and neglect, and  its contents now stand at around 2000 items – including many non-English and internationally published items.

Shortly after finding a new home in Seomra, the collection was brought to Italy as part of Sarah Pierce's Monk's Garden Project at that year’s Venice Biennale and then on to a follow-up show at Cork’s Glucksman Gallery in 2006. Later that year the archive was involved in a number of small-scale exhibitions at Docklands City Cycle and in Pride Dublin. Ciarán Walsh and Anto Dillon of Loserdom organised an exhibition called "Zine Show – A celebration of Zines and Do-It-Yourself publishing in the form of an exhibition of zines/zine art (both Irish and international)." The exhibition was a collection of covers from the Forgotten Zine Archive, which were displayed along the wall of a Dublin bookstore, and attendees were given freesheets and handouts to take home. That exhibition could almost be viewed as a precursor to Independents Day, as it featured a range of activities from people involved in the local zine/underground scene, which included readings by local zinesters and acoustic music.

There was a great buzz about the zine archive at the time, but a combination of exhibition funding drying up and those involved with the archive moving away meant that it quickly fell on hard times later the next year. It essentially went into cold storage. 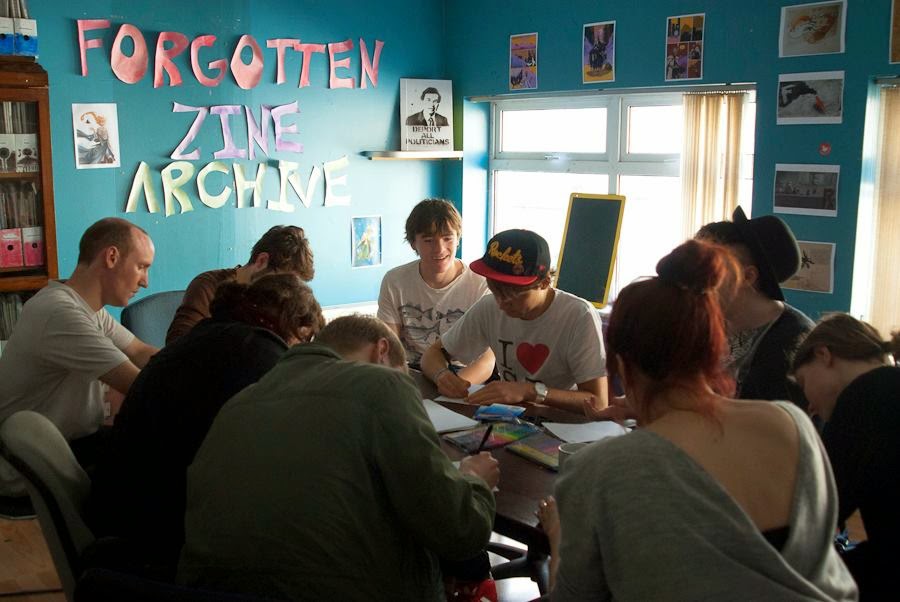 Three years ago a group of librarians took it out of storage, classified and catalogued it. We quickly formed an alliance with another group set up in Dublin - the Dublin Zine Collective (formerly Eddie Pie Hands Printing) and have been trying to foster the independent publishing scene through various activities, such as workshops, meet-ups and an exhibition in the Centre for Creative Practices, at the Dublin Zine Fair last year.

The Forgotten Zine Archive is the only independent, dedicated zine archive in the country. Zines are items of ephemera, they are not created with long-term storage in mind. The fact that the archive has survived for 11 years is remarkable.  It survives on donations. Ultimately we would like to be a repository for physical zines made in Ireland. So if anyone has any zines they would like to donate, either get in touch with Tom Maher or me, or drop down to Independents Day, where will will have a stall selling zines, and the archive will be on display for people to browse through. 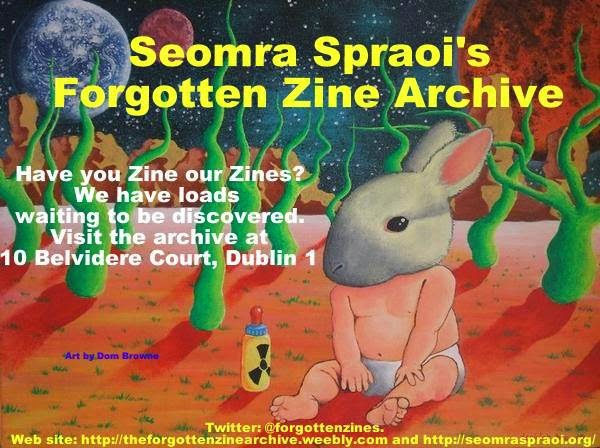 The zine archive is more than just a collection of zines. It is an archive of print and DIY culture in Ireland, dating back to the 1970's. A lot of what is written about in zines is not being covered else where. By making and distributing zines, the zine community is creating its own historical records, and that is why it's important to archive zines, least this history would be forgotten.

Today the Forgotten Zine Archive exists as a space to empower the disenfranchised, and as a platform for lending their voices extra weight. While individually the content within zines speaks for itself, when these forgotten zines are brought together, it amplifies their voices all the more.That's the role of any memory institution worth it's salt, and that role is a vital one.

God save the zine!!

(You can read more about the work of the forgotten zine archive in various blog posts, academic journal articles or on our twitter of Facebook pages. Sound!)
Posted by Mick O'Dwyer at 6:23 AM